Perhaps in preparation for the launch of their new services at the end of the month, JetGo Australia Embraer E-135 VH-JTG called into Rockhampton Airport from Townsville on Wednesday 2 September.  It arrived as JG90. 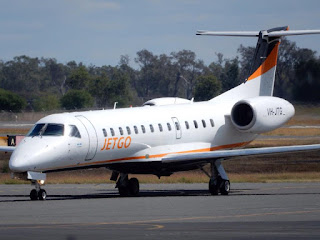 Local plane spotters Isaac M and Kayanne H were on hand to capture some great photos as the E-135 parked on the Southern end of the Rockhampton Airport apron.  It looked like ground handling staff were given an induction into how to service the aircraft while it was on the ground.

After around an hour on the ground, and after taking on fuel, VH-JTG departed back to Townsville as JG91.

Finally, the CQ Plane Spotting Blog will on board JetGo's inaugural service linking Townsville, Rockhampton and the Gold Coast on Monday 28 September!

It will be a big day with planned departure of the JG70 service from Townsville at 7.30am.  We return on the afternoon JG73 flight, arriving back in the Far North at 5.30pm.  It will be an awesome day!

I would expect more visits from JetGo E-135s in the coming weeks in the lead up to start of the scheduled services - watch this space!

Thanks to Isaac and Kayanne for sending through these great photos!