Its arrival made for a spectacular sight with P2-PAU joining McDermott Aviation Bell 214B-1 Biglifter helicopter VH-SUH which remains parked on the Gladstone Airport apron. 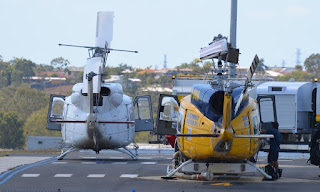 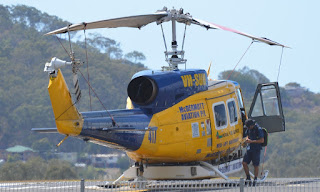 I believe P2-PAU arrived from Mackay.  It looked to arrive in Mackay on Saturday 26 September from Cairns and Townsville.

P2-PAU departed further to the South - via Bundaberg I'm told. 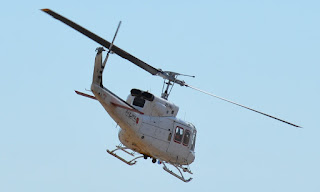 Before he left, Michael also captured a quick photo of Paton Air (of Victoria) Bell 206B VH-HST which wears titles of Australian Aerial Mapping (AAM). 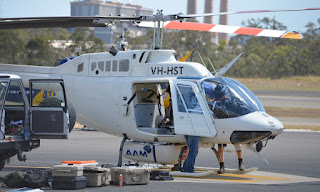 Finally, I note with interest that on Monday 28 September, the sleek Corporate Aviation Bell 429 VH-EQP will make yet another visit at Gladstone Airport to take on fuel while travelling from its Southport base to Hamilton Island.

All photos taken by Michael Fleetwood  ©
Posted by Damian F at 7:08 PM