Well, I said I wouldn't prepare any specific Blog posts on the influx of Virgin Australia jets heading to Gladstone Airport, but on Tuesday 29 September it was a bit of an historic day as every Virgin Australia service in and out the industrial city was operated by an Embraer E-190 jet - there were no Virgin Australia Regional Airlines (VARA) ATR 72s to be seen! 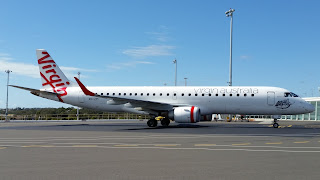 In fact, the Virgin Australia jet action actually started on Monday 28 September with E-190 VH-ZPG operating the morning VOZ1707/1710 service before the larger Boeing B737-800 VH-YFP was noted operating as VOZ1709/1712 also from and back to Brisbane.

Later on Monday 28 September, Virgin E-190 VH-ZPD touched down from Brisbane as VOZ1719 and stayed for the night.  VH-ZPD then kicked off the E-190 on Tuesday 29 September departing back to Brisbane as VOZ1708.

Also calling in on Tuesday 29 September were E-190s VH-ZPJ, VH-ZPG and VH-ZPH with VH-ZPG calling back in after dark and again staying for the night.

While we're posting about Gladstone Airport, a couple of other interesting visitors this week has included Royal Flying Doctor Service (RFDS) (South East Section) Beech B300 Super King Air VH-SQR which had an early morning arrival from Moomba on Tuesday 29 September.

VH-SQR was due to depart to its Adelaide base early on Wednesday 30 September.

The helicopter action at Gladstone Airport has continued with Corporate Aviation Bell 429 VH-EQP calling in on Monday 28 September while flying from its Southport base to Hamilton Island.

And finally on Monday 28 September, McDermott Aviation Bell 214B-1 Biglifter helicopter VH-SUH was believed to have departed Gladstone Airport for good. 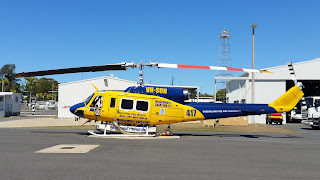 It has been based in Gladstone for the last couple of weeks while on standby for fire fighting duties.