Despite the cloudy skies - and occasional rain showers - it looked like another spectacular day of plane spotting over on Hamilton Island on Saturday 12 September.  Not only are there around 30 Cirrus SR20 and SR22 aircraft currently parked on Hamo for the 'Cirrus Life Event' hosted by Cirrus Australia, but there was the rare sight of three Qantas Airways Boeing B737-800s on the ground at once including one very specially coloured example. 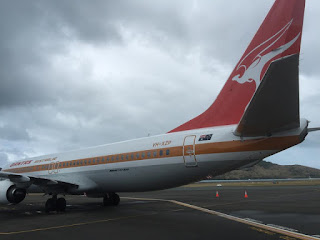 Qantas B737-800 VH-XZP - which is painted in a special 'retro' colour scheme featuring the iconic ochre colour scheme first introduced by Qantas in 1967 - touched down at Hamilton Island Airport early on Saturday 12 September from Sydney as QFA1360. 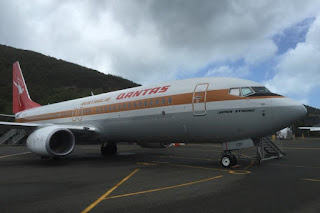 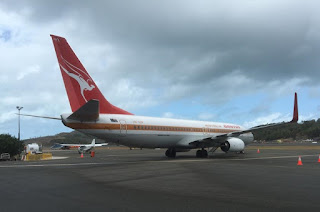 This was presumably a charter flight and it saw VH-XZP remain parked at Hamo for most of the day.  'Retro-Roo' was later noted departing back to Sydney as QFA1361. 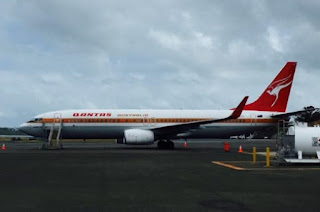 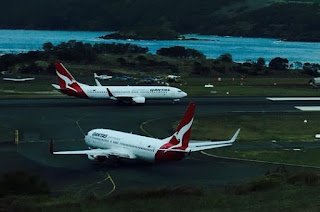 And of course, there was the other usual commercial traffic into Hamo on a Saturday including three Virgin Australia B737-800s flights from Melbourne, Sydney and Brisbane, a Jetstar Airbus A320 service from Sydney and two QantasLink Dash-8-Q400 services from Cairns and Brisbane.

Sincere thanks to 'AC' and Kevin P for sending through these great photos and allowing us share them!

If you are a plane spotter that likes taking photos of plane and you live in Mackay or the Whitsundays and would like to contribute to the CQ Plane Spotting Blog, we would like to hear from you!