Pacific Aerospace PAC 750XL ZK-KNR was noted calling into Longreach Airport from the Gold Coast on Sunday 13 September.  It had completed the trans-Pacific crossing from Hamilton in New Zealand to the Gold Coast the previous day.  It departed to Darwin on Monday 14 September. 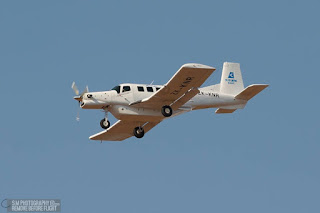 ZK-KNR was noted wearing the titles and colours of Beijing General Aviation Company of China and is presumably on a delivery flight from New Zealand.

In late August, fellow PAC 750XL ZK-KNQ flew from Longreach to Darwin and further also on delivery to China.


Also on Monday 14 September, Hinterland Aviation Cessna 402 VH-TFZ operated into Longreach from Cairns as 'HND626'.  After around an hour on the ground, it departed back to Cairns.

And as I was writing this post I observed on flight tracking website Flightradar24 that Royal Australian Air Force (RAAF) Beech B350 Super King Air A32-348 was departing Longreach heading North as "Hudson 8".

Meanwhile, over the last few days, Longreach Airport has played host to several other lighties including Cloncurry-based Pilatus PC-12/47E VH-MDH which called into Longreach on Sunday 13 September from Canberra and Toowoomba.  It later departed to Devoncourt Station.

A pair of Toowoomba-based B200 King Airs called into Longreach on Friday 11 September.  Both VH-NME and VH-WXN flew from Cloncurry to Longreach and then Brisbane West Wellcamp Airport on what looks to be a regular Fly-in Fly-out (FIFO) run.

Also on Friday 11 September, Sharp Aviation / Air Venture Australia Cessna 441 Conquest II VH-YHV "Outback Jet" departed to Rolleston Aerodrome.  It arrived from Bloomfield River, Cairns and Charters Towers on Thursday 10 September and looked to be operating a tourist flight around parts of Australia.  It was expected to return 'home' to Melbourne (Essendon) Airport on Sunday 13 September.