AirServices Australia / Pearl Aviation Hawker Beechcraft B300 Super King Air VH-FIY touched down at Gladstone Airport from Brisbane during the afternoon on Friday 2 October.  Local plane spotter Michael F ventured to Gladstone Airport during the morning on Saturday 3 October and captured a couple of photos as it departed on a local navigation aid (navaid) calibration flight around the Airport.

VH-FIY departed further North to Townsville during the afternoon.  It was heard to be using its usual radio callsign of "AusCal 3".

About the same time on Saturday 3 October, Michael also captured a couple of photos of R-Mach Aviation Cessna 337G Super Skymaster VH-JOE which was visiting Gladstone in a bushfire spotting role using the radio callsign of "Birddog 410".

Another bushfire spotting aircraft, believed to be Tisdall Aviation Beech 58 Baron VH-PRG, was also noted calling into Gladstone on Saturday 3 October as "Birddog 409".

Also spotted at Gladstone Airport was Lancair IV-P VH-LWL which arrived from the Sunshine Coast on Thursday 1 October.

A couple of commercial movements captured by Michael on Saturday 3 October included Virgin Australia Embraer E-190 VH-ZPK which operated the VOZ1709/1712 scheduled service from and back to Brisbane.

The E-190s continue to operate into Gladstone Airport replacing services that would usually be operated by Virgin Australia Regional Airlines (VARA) ATR 72 turbo-props.  Most days during the previous week there were 1-2 E-190s touching down with - as posted below - five E-190s noted visiting Gladstone on Tuesday 29 September.

QantasLink Dash-8-Q400 VH-QOK was also captured as it touched down as QLK2334 from Brisbane.  VH-QOK wears a small 'Recognise' sticker just behind the cockpit windows on both the port and starboard sides of the aircraft.

Finally, as bushfires flared up nearby to Gladstone Airport later on Saturday 3 October, Michael captured some photos McDermott Aviation Bell 214B-1 Biglifter helicopter VH-SUH which has recently been based at Gladstone Airport on standby for bushfire fighting duties. 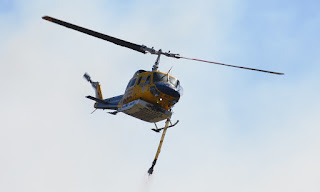 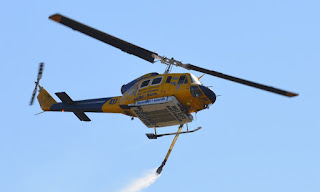 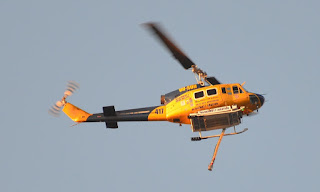 All photos taken by Michael Fleetwood  ©
Posted by Damian F at 10:43 PM