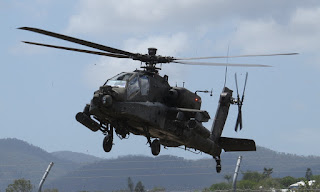 Kayanne has sent through some great photos as RSAF Boeing AH-64D Apache helicopter - serial '068' - flying as "Astro" - operated various hover and other test flights around their new landing ground inside the Australian Army Defence Support Group (DSG) 'Camp Rocky' which is adjacent to Rockhampton Airport.  The RSAF has re-named the DSG as 'Warriors Camp' while they utilise the facility to launch and park their helicopters.

'068' is one of four RSAF Apache helicopters currently parked inside 'Warriors Camp' - which is also a challenging place to capture photos! 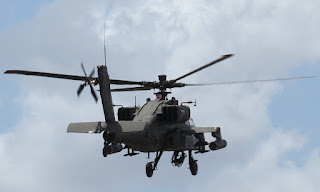 Later on Friday 9 October, all four RSAF AH-64D Apache helicopters departed 'Warriors Camp' for Shoalwater Bay, flying together as "Astro" - as they did yesterday - see Blog post below.

Some great photos taken by Kayanne and we thank her sincerely for taking the time to capture and send them through for you to enjoy!

All photos taken by Kayanne Hardsman  ©
Posted by Damian F at 9:42 PM