Two more exotic overseas bizjets plus a pair of local bizjets were noted calling into Hamilton Island Airport on Thursday 1 October - what a stunning run of visitors it's been!


TAG Aviation Asia Bombardier BD-700-1A10 Global 6000 VP-CEW was first to touch down at Hamo, arriving from Hong Kong and Townsville as 'TBJ80'.


It later departed to back to Townsville where it remains parked due to the obvious parking restrictions on Hamilton Island given all the arrivals over the last couple of days.

A little later, another exotic bizjet in the form of VistaJet Malta Bombardier BD-700-1A10 Global 6000 9H-VJN also touched down on Hamilton Island but as 'VJT869V' from Honolulu and Cairns. 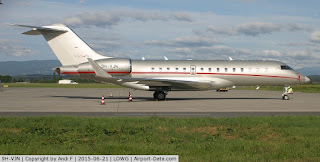 It too later departed Hamo, ferrying back to Cairns,

Finally, a pair of locally-based bizjets also visited Hamilton Island Airport on Thursday 1 October with Balmoral Air (operated for Hamilton Island's owner, and well-known vineyard owner, Bob Oatley) Dassault Falcon 2000LX VH-WIO (shown above) visiting for part of the day from its Bankstown base, while Silver Linings Aviation Cessna 680 Citation Sovereign VH-ZEK was also noted calling into Hamo from Bankstown but looked to stay for the night.

Early indications suggest that there might even be more locally-based bizjets arriving and departing Hamilton Island Airport on Friday 2 October. Wow!
Posted by Damian F at 10:55 PM