Central Queensland is a popular place for the Queensland Government's Community Cabinet meetings, with this month's meeting being held at Bundaberg, thus bringing both Government corporate aircraft to Bundaberg Airport on Sunday 18 October. 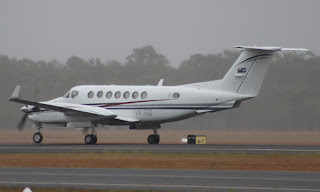 VH-SGY departed back to the capital on Monday 19 October while VH-SGQ was captured by local plane spotter Tom H also on Monday departing Bundy for Mackay and then Brisbane.  It returned to Bundaberg a little later on Monday before departing back to Brisbane.


One of the more interesting visitors to Bundaberg Airport in recent days - and spotted several times flying what has been reported as training missions in the skies of the Rum City - has been the Queensland Police Service (Airwing) Eurocopter (Bolkow) BO105 CBS-5 helicopter VH-NVI "Polair 1". 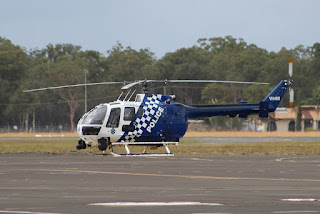 VH-NVI is one of two helicopters - the other is VH-NVK "Polair 2" - purchased by Surf Life Saving Queensland (SLSQ) for use by the Queensland Police Service as an "eye in the sky".

Another helicopter still parked at Bundaberg Airport that was also captured by Tom on Monday 19 October was McDermott Aviation Bell 204B Helicopter VH-OCD 'Helitack 416' which has taken up residence and is on 'stand-by' presumably as an aerial firefighting platform.

While he was at Bundaberg Airport on Monday 19 October, Tom also captured some of the other comings and goings to the Rum City including Seair Pacific / Istlecote Cessna 208 Caravan VH-LMD which was presumably arriving from the South East corner of Queensland and later headed off to nearby Lady Elliot Island on the Southern Great Barrier Reef. 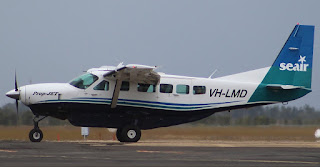 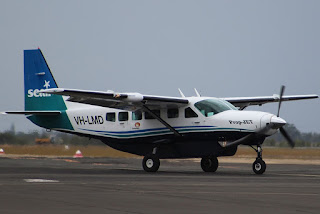 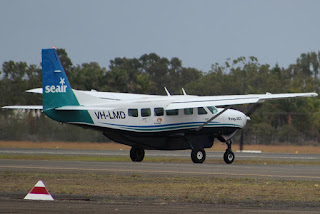 QantasLink Dash-8-Q400 Next Gen VH-LQJ was also spotted as it arrived on the scheduled QLK2320 service from Brisbane. 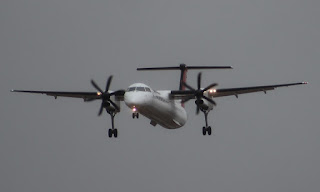 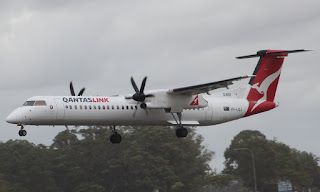 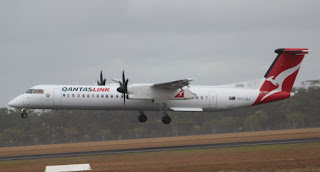 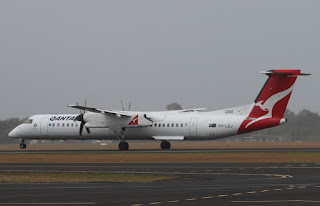 Tom also noticed that like in Rockhampton, QantasLink have started using what looks to be a ramp for off-loading and boarding passengers at Bundaberg Airport now too. 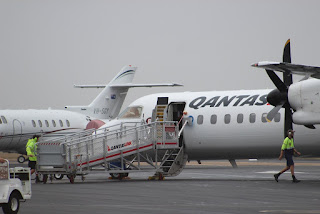 Finally, Tom spotted his second Surveillance Australia / Australian Border Force (ABF) aircraft in a few days with Cobham Aviation-operated Dash-8-202 VH-ZZC captured on Monday 19 October preparing for departure on another sortie up and down the Queensland coast. 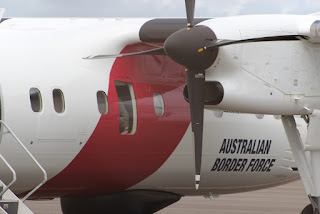 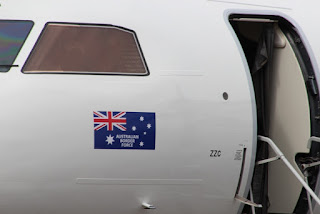 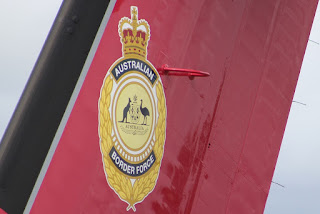 Some great plane spotting action from Bundaberg Airport and we sincerely thank Tom for taking the time to capture and send through these awesome photos - even though he reports that weather was less than favourable at times!

All photos taken by Tom Houghton  ©
Posted by Damian F at 9:27 PM