On Saturday 24 October, Virgin Australia's newest Boeing B737-800 VH-YFU entered service and called into both Mackay and Rockhampton Airports.

VH-YFU was delivered to Virgin Australia in early October and wears the name "Emu Beach".

Meanwhile, while she was at Rockhampton Airport a little earlier on Saturday 24 October, Kayanne also captured fellow Virgin Australia Boeing B737-800 VH-VOS which operated the VOZ1235/1238 service also from and back to Brisbane.

Meanwhile, also on Saturday 24 October, QantasLink Dash-8-Q400 VH-QOW was spotted sitting on the Rockhampton Airport on apron receiving attention which on closer inspection involved replacing a cracked windscreen.  VH-QOW had arrived the previous evening on Friday 23 October as QLK2368.  It later re-positioned empty back to Brisbane. 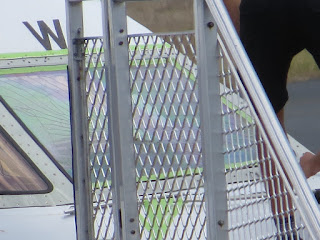 Sincere thanks once again to Kayanne for capturing and sending through these great photos - particularly of VH-YFU on its first day of operations!

All photos taken by Kayanne Hardsman  ©
Posted by Damian F at 7:35 AM