A couple of nice helicopters have been noted passing through Emerald and Longreach Airports in recent days with perhaps the nicest being the big Bond Helicopters Sikorsky S-92A helicopter VH-NYW, which passed through Longreach and Emerald Airports on Sunday 18 October while on a ferry flight from Western Australia to Caloundra on the Sunshine Coast. 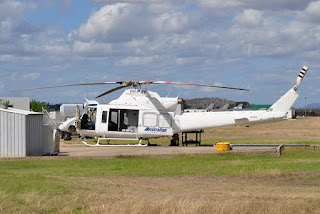 I spotted VH-PXY sitting outside the locally-based Capricorn Helicopter Rescue Service (CHRS) while it was on 'stand-by' for the fellow Australian Helicopters operated CHRS Bell 412EP VH-EPR while it undergoes some planned maintenance.

UPDATE!  VH-PXY ferried South from Rockhampton to Redcliffe via Bundaberg early on Monday 19 October.  It appears that yet another Australian Helicopters operated Bell 412 VH-LSY has ferried into Rockhampton Airport and is now on 'stand-by' for the CHRS Bell 412EP VH-EPR.
Posted by Damian F at 6:03 PM