On Thursday 29 October, Royal Australian Air Force (RAAF) Canadair CL-600-2B16 Challenger 604 bizjet A37-002 called into both Mackay and Maryborough Airports.  Local media showed Deputy Prime Minister Warren Truss was in Mackay announcing upgrades to local roads so it is presumed that the Challenger took him home to the Fraser Coast. 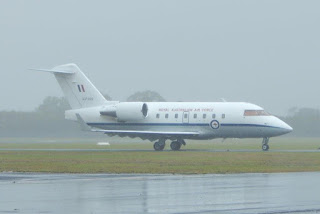 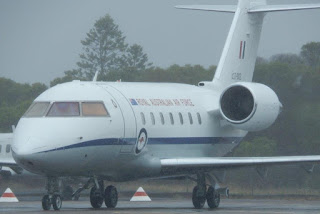 A37-002 was flying as "Consort 93" and looked to start its day of flying at Canberra.  It then flew North to Townsville before flying South to Mackay and then Maryborough.  After departing Maryborough, it appeared that the Challenger returned to Canberra.

Sincere thanks to David G of Maryborough Aviation Services for capturing these two photos under very trying conditions with non-stop rain during the Challenger's visit!