For the second time this week Royal Australian Air Force (RAAF) Canadair CL-600-2B16 Challenger 604 bizjet A37-003 of the VIP 34 Squadron in Canberra has been noted calling into Central Queensland. 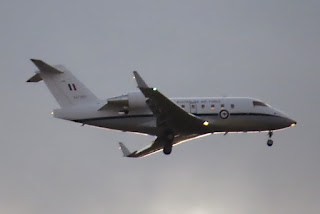 On Thursday 1 October, A37-003 - this time flying as "Regent 49" - was captured on final approach to Rockhampton Airport by local plane spotter Kayanne H.

It appears that A37-003 flew into Rocky from Canberra, and after a short time on the ground, returned to the nation's capital.  I believe that Deputy Prime Minister Warren Truss was brought to town.