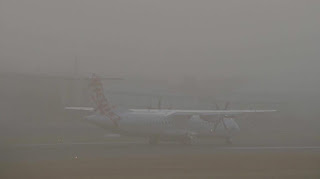 Notably, the morning QantasLink QLK2331 service from Gladstone to Brisbane was forced to return to the Gladstone after a significant period of holding North of Brisbane.  The flight was operated by Dash-8-Q400 VH-QOK which eventually made it to Brisbane later as QLK2333.

Another diversion occurred when QantasLink (Cobham Aviation) Boeing B717-200 VH-NXR, operating the morning QJE1771 service from Mackay to Brisbane, was forced to land at the Gold Coast, again after a period of holding North of Brisbane.  VH-NXR eventually made the hop North to Brisbane around midday.

It was also worth noting that from flight tracking website Flightaware, the other morning flights from Mackay, Rockhampton and Gladstone to Brisbane all experienced delays either is the air or on the ground.