Another bizjet in the form of TWC Logistics Hawker Beechcraft 390 Premier 1 bizjet VH-TGQ was also due to call into Hamo on Wednesday but it is unclear if it actually arrived!

UPDATE!  VH-TGQ did NOT arrive on Wednesday 10 June - it ended up arriving from Archerfield on Friday 12 June - see Blog Post up above!

Meanwhile, departing Hamilton Island on Wednesday 10 June was the visiting West Australia-based SOCATA TBM-850 (700N) VH-TBM.  It departed to Coober Pedy and later its Jandakot base.

As mentioned below, Mitchell Water Australia Cessna 525 Citation M2 bizjet VH-WMY called into Hamilton Island twice on Tuesday 9 June - I captured the smart little bizjet parked at Clermont Aerodrome during the morning after it had earlier touched down from Hamo. 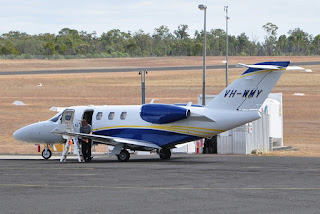 And Gulf Aircraft Cessna 680 Citation Sovereign bizjet VH-PYN was also believed to have also called into Hamo on Tuesday 9 June.