And a Couple More Bizjets Come and Go at Hamilton Island Airport - Along With a Few Van's Lighties!

Another day, and another nice pair of bizjets have called into Hamilton Island Airport on Saturday 20 June with, on this occasion, the star arrival being News Corporation Gulfstream Aerospace G-V-SP Gulfstream G550 N897NC touching down from Sydney.


The sleek Gulfstream is operated by News Corporation and is a fairly regular visitor to Australian Airports, although this is its first visit to CQ.  N897NC departed a short time later to Brisbane.

Another familiar visitor to Hamilton Island in the form of Shortstop Jet Charter British Aerospace BAe-125-1000B bizjet VH-LMP called in once again on Saturday 20 June from its Melbourne (Essendon) base.  It expected to return there however on Sunday 21 June.

Finally, some other interesting (light) aircraft were all noted calling into Hamilton Island Airport on Saturday 20 June with several Van's aircraft touching down from various parts.  RV-7s VH-RQV and VH-YXC, along with RV-6s VH-TBH and VH-RTJ (pictured below at the Old Station Fly-in last month) were all believed to have touched down at Hamo! 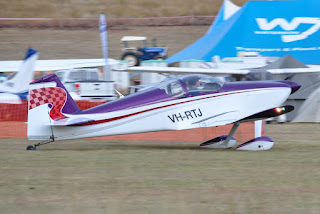 Van's Aircraft is an American kit aircraft manufacturer, founded by Richard "Van" VanGrunsven in 1973.
Posted by Damian F at 10:07 PM