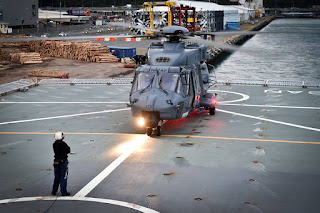 Two ships, four aircraft, around 45 military vehicles including 22 Light Armoured Vehicles, and 620 personnel are deploying to Darwin and the Shoalwater Bay Military Training Area near Rockhampton for the almost month long exercise.

The exercise is the largest that the Australian Defence Force (ADF) conducts with all four services of the United States armed forces. Like the NZDF, the Japan Self Defence Force is also joining the biennial exercise for the first time.

By sheer breadth of the training alone, Talisman Sabre is a great opportunity for our people. From Sunday 5 July for two weeks, the NZDF will undertake training in land, air and maritime warfare, including amphibious operations. By operating in a uniquely complex and challenging multinational environment, they will be able to further hone their warfighting capabilities and their ability to respond to a wide variety of contingencies.
Posted by Damian F at 7:16 AM