Aside from the usual Embraer E-190 jets that call into Gladstone Airport on Saturdays, during the course of this week, Virgin Australia operated a pair of Boeing B737-800 jets into the industrial city on Wednesday 24 June and Thursday 25 June. 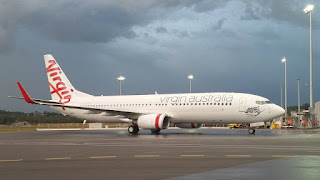 On Wednesday, VH-YFJ was noted operating the late-morning VOZ1711/1714 service from and back to Brisbane, while on Thursday, VH-VUJ was spotted just after arriving as VOZ1717 again from Brisbane.

VH-VUJ arrived into Gladstone under very threatening skies and as it happened, a nasty storm passed through parts of Central Queensland on Thursday afternoon, including Gladstone. 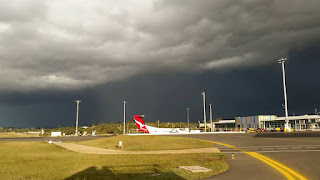 Thunder and lightning, along with strong wind and rain, and occasional hail, were all noted as the storms passed through on Thursday afternoon.

VH-VUJ departed back to Brisbane as VOZ1720 without incident.

Thanks to Col for allowing us to share his dramatic photos!