Local plane spotters Jamie and Tash were on hand twice last week as Virgin Australia operated a pair of the larger Boeing B737-800 jet aircraft into Gladstone Airport on scheduled services from and back to Brisbane. 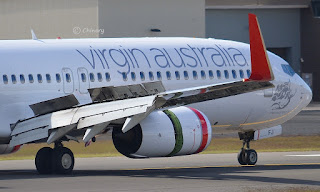 Some great photos and our sincere thanks to Jamie and Tash for taking the time to capture and send through their awesome photos!