A fantastic day at Proserpine on Tuesday 30 June with the mighty Queensland Maroons Rugby League Football team calling in for a very popular fan day in the sugar producing town.  The Maroons flew into Proserpine / Whitsunday Coast Airport on board Alliance Airlines Fokker F-100 VH-FKA which touched down from Brisbane early on Tuesday as UTY3396. 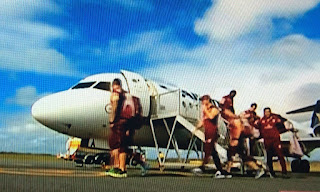 During the afternoon, VH-FKA returned to Brisbane as UTY3397.

Meanwhile, late on Monday 29 June, Tigerair (Tiger Airways) Australia commenced an additional flight in to Proserpine / Whitsunday Coast Airport from and back to Sydney. 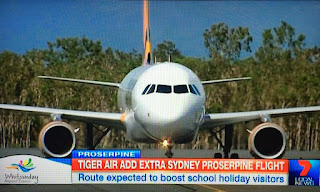 The new afternoon-timed TGW396/399 flight adds to Tigerair's existing three-times-a-week morning flights from and back to Sydney and signals a well received increase in services.