Making its second appearance at Hamilton Island Airport in just over a week was News Corporation Gulfstream Aerospace G-V-SP Gulfstream G550 N897NC which called in briefly on Monday 29 June. 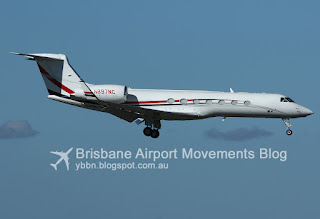 On this occassion, N897NC touched down from Brisbane and continued North to Townsville a short time later.  N897NC was then noted to depart overseas to Honolulu and Los Angeles.

Thanks to the guys at the awesome Brisbane Airport Movements Blog ( http://ybbn.blogspot.com.au/ ) for allowing us to share their great photos N897NC captured last week as it arrived into Brisbane from Hamo!
Posted by Damian F at 10:00 AM