The Queensland Government Airwing (State of Queensland) Raytheon Hawker 850XP bizjet VH-SGY was spotted at Maryborough Airport on Tuesday 16 June.  It touched down from Brisbane. 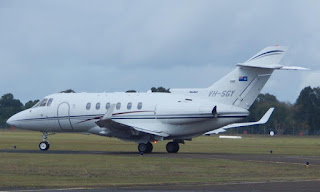 David G from Maryborough Aviation Services has again been kind enough to send through a great photo of VH-SGY as it departed back to Brisbane later in the day.

Meanwhile, on Monday 15 June, a familiar visitor to CQ Airports in the form of Shadforth's Plant Hire Raytheon (Beech) C90A (C90B King Air) VH-JEO was also captured by David as it called into Maryborough Airport for most of the day from the Sunshine Coast. 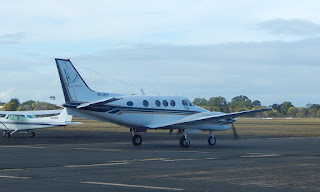 Finally, as mentioned below, over the course of Monday 15 June and Tuesday 16 June, the skies above Maryborough played host to some of the four Becker Helicopter Services Bell 206 Jetrangers that flew from their Sunshine Coast base to Bundaberg and back.