I've come across a couple of photos from last week of Virgin Australia Embraer E-190 VH-ZPR grounded at Mackay Airport after suffering a birdstrike shortly after landing from Brisbane as VOZ601 on Thursday 18 June. 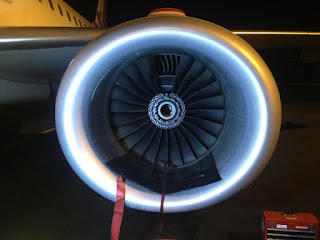 After remaining on the ground for the rest of Thursday and into the night, and then noted conducting high-power engine runs the next morning, VH-ZPR departed Mackay on Friday 19 June, positioning empty to Melbourne (Tullamarine) as VOZ9918.  It re-entered service with Virgin Australia later that day.

Meanwhile, a couple of other notable visitors into Mackay Airport last week included Careflight Queensland (Aeromed) LearJet 45 VH-VVI which called into the sugar city on Sunday 21 June.  It presumably operated a med-evac flight, arriving from Townsville and later departing to Brisbane as "Ambulance 451".

On Friday 19 June, the Queensland Police Service (Airwing) Cessna 560 Citation Ultra bizjet VH-PSU also called into Mackay Airport during its busy day of flying, while also on Friday, West Wing Aviation Cessna 208B Caravan VH-XDU was due to call in from Townsville.

As mentioned below, on Thursday 18 June, Queensland Government (QGAir) Rescue Bell 412 VH-ESD called into Mackay while flying North from Archerfield to Townsville via Gladstone and Mackay.