Somewhat overshadowed by the emergency arrival of Jetstar A320 VH-VGR was the visit again to Rockhampton Airport late on Monday 8 June of Alliance Airlines Fokker F-100 VH-FKG.  Having taken a load of passenger North to Cairns over the weekend (pictured below), VH-FKG returned from Cairns and later departed back to Brisbane as UTY563. 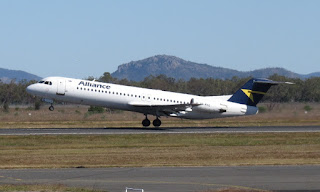 Meanwhile, another visitor to Rocky very late on Monday 8 June (actually visiting in the wee small hours of Tuesday 9 June) was GSL Aviation Piper PA-31-350 Navajo Chieftan VH-KFU which touched down at Rockhampton from Cairns and Mackay.  It then returned to Cairns.

I presume that its visit had something to do with the diverted Jetstar A320 VH-VGR which, as mentioned below, arrived late on Monday 8 June, making an emergency landing.